Hats For Every Man – How To Choose Your Hat

Hats For Every Man

As men become more fashion savvy than ever, experimenting with new looks and styles, there has been a huge boom in the accessories market. Hats are a great way to change up a look, adding to your clothes to make you look smarter or more casual as you desire. There is a huge selection of hats on offer to buy now, and here is just a small selection of the styles available on the market and how to wear them.

Incredibly versatile and a go to style for when you are having a bad hair day, or simply feel like looking more casual, as sported by David Beckham dressed down in denim and a leather jacket. Beanies are also worn in this image taken backstage at a show at London Collections Men, matched to the colour of suits which would look great on the way to work.

Boaters have experienced something of a comeback this year, partly due to the film The Great Gatsby where they are worn by Leonardo DiCaprio and Toby Maguire. They are great for Summer, are a great shape and smarten up a casual outfit. The colour of the boater works really well with the bright orange of the jumper in the first image, from the French movie Heartbeats, and the second image shows just how smart the boater can be.

Probably the most popular hat today. Traditionally worn by younger guys, it is now worn by a huge range of people. Pharrell sports a geek chic look, pairing his red cap with thick rimmed glasses, and a model on the streets of Paris shows how to wear it backwards.

Traditional, English and old fashioned, this is another style that is popular once more. Again worn casually by David Beckham and a smarter look on the Burberry catwalk.

Super cool, rakish and smart. Worn in so many ways – Don Draper of Mad Men pairs his with a suit, while Harry Styles and Johnny Depp wear it casually. Douglas Booth wears a straw, navy version which really suits his festival look. 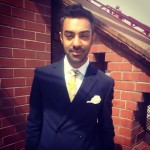 Tajinder Hayer is a UK based menswear writer and blogger. The Rakish Gent is a lifestyle and fashion blog for men, featuring inspirational styling mixing high street with high fashion with what to read, see & do. Tajinder has also written for British Style Bloggers for whom he contributes a monthly column as well as Spashion and Menswear Style amongst a host of other publications.

The 6 Best Hats to Compliment Any Hair Style